A Holiday Season Kickoff at AWS re:Invent 2016 — Gifts From the Cloud

Drew Wright | December 17, 2016
We’re a couple of weeks out of re:Invent and its dizzying buzz—the slew of service and feature announcements, the industry tracks and community meetings, the Mini Cons, the integration and how-to session deep dives, the intensive networking, the mall of sponsors with every manner of product presentation … even festive bling from the ever-present registration DJ. We’ve had some time to digest what we saw and learned this time around and to think about a few of the more compelling offerings.

In this post, we’re not going to recap the full laundry list of new services introduced or feature enhancements (many especially targeted at enterprise). Good overviews are abundant; here are ones from InfoQ, VentureBeat, and Rackspace. Instead, let’s zero in on a handful of provocative developments. Presented a bit like AWS holiday gifts by Andy and Werner to an eager, tough-to-buy-for crowd, some are subtly wrapped, some full monty wow-worthy.

Conduct a little experiment: Every AWS service typically carries this formulation as its high-level URL: https://aws.amazon.com/servicehere/ Not Lightsail. Try it out. Its “servicehere,” i.e., https://aws.amazon.com/lightsail/, redirects to https://amazonlightsail.com, a fancy, yet standard marketing site, following clean, now common design principles. A standalone site. A fully self-contained service. When you “Get Started” there, you are indeed pointed at your AWS account login, but once inside, you’re not in the Management Console proper. You can use Lightsail and think of it almost entirely divorced from other AWS services; it’s presented as a service apart.

If you know your way around AWS, you certainly can connect your project into other services, but there’s no obvious encouragement to do so. You don’t have to fall into the deep end of the Console, a place where a novice can drown fast. This is subtle, but this is different. This is presentation that signals something. With Lightsail, AWS is wetting its feet in a different market, more of a direct consumer, web tech market—the little compute guy. The gal who is spinning up WordPress sites for small business clients and hosting them on an easy, ready-to-roll, reliable VPS. Contemplate that.

AWS Lightsail is a Virtual Private Server (VPS) offering. In introducing Lightsail in his blog during re:Invent, Jeff Barr explained that sometimes you simply want “a system that is preconfigured and pre-assembled, and is ready to run your web applications with no system-building effort on your part.” The docs are not for seasoned pros, hardcore developers, backend masters of the universe; they are for smart newbies who learn fast: “Get started with your virtual private server and learn more about our one-click apps and development stacks.” “Learn about the Domain Name System (DNS) and how to create a DNS zone in Lightsail.” “Understanding public ports and firewalls…” Indeed.

A reasonably well known, agile company in the same market space offers a menu of hosting plans. Here’s a look at one of those plans with Lightsail’s comparable tier:

Those are light sails for sure. Battle of Salamis, anyone? (But where the empire has adopted the swift strategies of the competition.) AWS’s hallmark, of course, is being a competitive powerhouse along every tributary of development. Every company in every space has to move fast.

AWS X-Ray is still in preview. But, look out everyone. Or, well, look in—into your applications. Depending upon how easily and efficiently X-Ray ultimately delivers on its promises, it could have big market buy-in, forging into a well traversed problem space with known players.

According to AWS, X-Ray “traces user requests as they travel through your entire application … aggregat[ing] the data generated by the individual services and resources that make up your application, providing you an end-to-end view of how your application is performing.” In real time, you could pinpoint the location of high latencies, see those on a services map, and “drill down into the specific services and paths that are performing poorly.”

In this early phase, X-ray is limited to applications written in Java, Node.js, and .NET that are deployed on EC2, ECS, and Beanstalk, with plans to support Lambda. X-Ray is a service to keep an eye on.

Speaking of Lambda, adding C# support means those same .NET developers can build serverless applications with AWS via Lambda and API Gateway. Keep in mind that at Microsoft Build this year, Scott Guthrie announced that Mono has been re-released under the MIT license and contributed to the .NET Foundation. That is, Microsoft essentially has made “Xamarin tools and code, which enable compilation of Mac, Android and iOS applications using C#, free and open source.” The significance of this move isn’t lost on AWS. .NET’s getting some love this holiday season and it’s a relationship ripe to grow.

Welcome, Your Cloud AI is Here to Serve You

Now to perhaps the most wondrous gifts. Like three kings, this year Satya Nadella (CEO Microsoft), Sundar Pichai (CEO Google), and Andy Jassy (CEO AWS) have begun the presentation of democratized AI to humanity in earnest.

In late September, Nadella defined AI as at the intersection of Microsoft’s ambitions, with suites of services and tools enhancing Cortana. Also announced at that time was the formation of the Microsoft AI and Research Group, putting the minds and efforts of some 5,000 computer scientists and engineers to AI product initiatives. Google has identified AI as one of its foci as well. Our everyday experience with Google Translate is about to become a much higher quality interaction; as of about two weeks ago, “Translate [has] been converted to an A.I.-based system for much of its traffic.” To understand what’s at stake there, take a look at the December 14th long feature from the New York Times Magazine. Well aware of fellow magi, at re:Invent Andy Jassy unveiled advanced deep learning, AI technologies: Lex, Polly, and Rekognition.

Language use and visual learning are core human communicative and interactive experiences. Each of these AWS AI services is worth reading about at length; they bring conversational interfaces to applications, turn text into lifelike speech, and add sophisticated, immediate image analysis to applications. They package algorithms difficult to access and understand, making them usable for any developer. They implement a “pay only for what you use” model, well suited to the cloud mindset. They represent a cusp of the future.

Three other items so raptly caught our attention that they merit a word here. AWS surfaced to the public a number of internal services and tools as they have in past years, but their exposure of elastic GPUs for EC2 and of Shield Standard / Shield Advanced (protection from and cost reduction related to DDoS attacks) signals their attentiveness to enterprise refinements. Plus, they’re really nifty.

Last but not least, it’s almost impossible to have attended re:Invent this year and not mention Snowmobile, which constitutes another major and necessary convenience for enterprises making the decision to move to cloud, enterprises with petabytes—even exabytes—of data.

Yet another Wow Factor, the second story Cloud Bar smack in the midst of the Expo Hall featuring pina coladas—without getting caught in the rain: 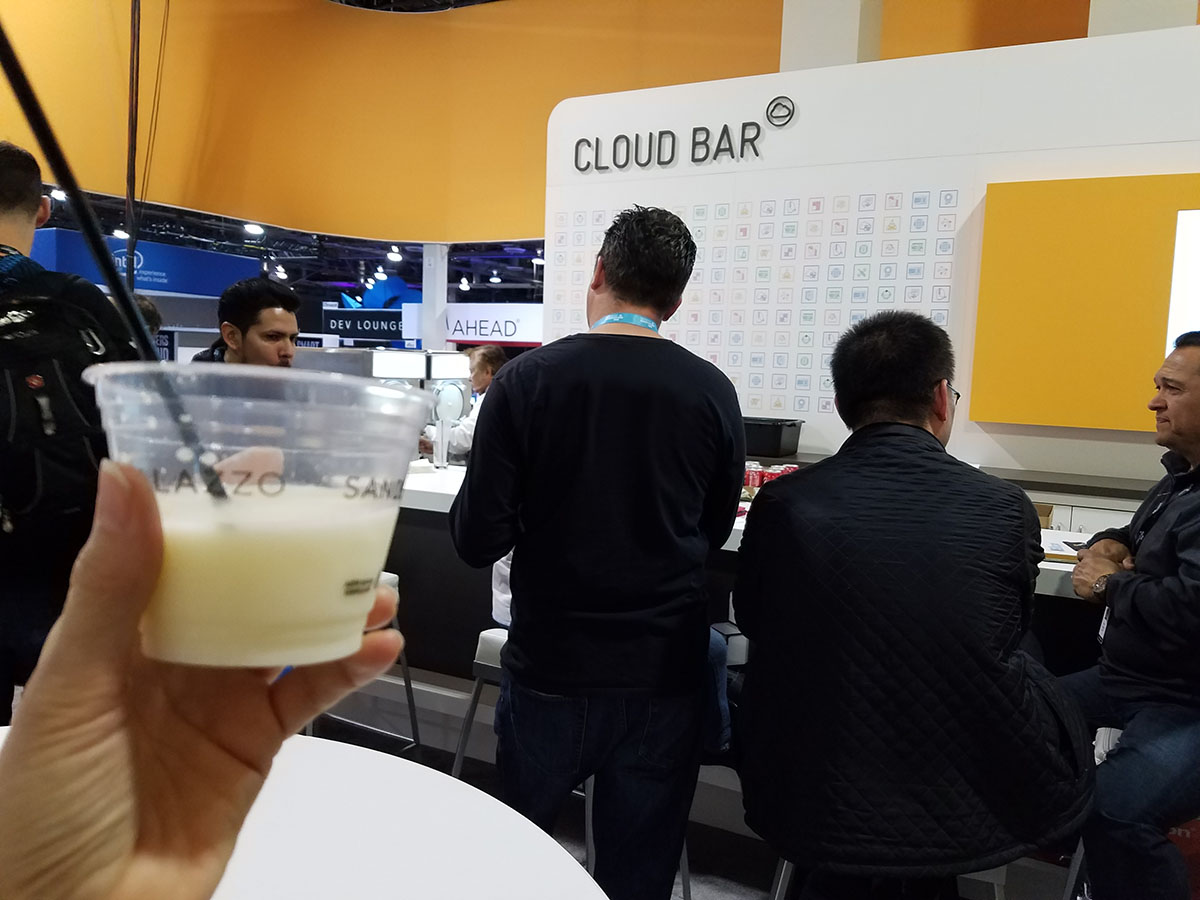 Fugue Had a Great Time—See You Next Year

The Fugue team had a lively, excellent five days of re:Invent madness in Las Vegas. We appreciate the thousand plus engagements at our booth, the one-on-one conversations, questions at our demos, and thoughtful feedback.

Mostly, you actually spinning up the free version of Fugue at re:Invent and, now, whenever you’d like from our website is the best gift we could ask for. Team and Enterprise versions will be available in Q1. Contact us here.

The growing number of new AWS services and features, adding to the comprehensive menu always available in the Console, means a net positive of choice for cloud stakeholders. But, that brings with it an ever increasing complexity. Give Fugue a try to radically simplify your cloud operations, to orchestrate configurations and enforce known infrastructure state, and to democratize your team’s cloud use!

Come talk to us at an upcoming conference! Just a sampling of Fugue folk: 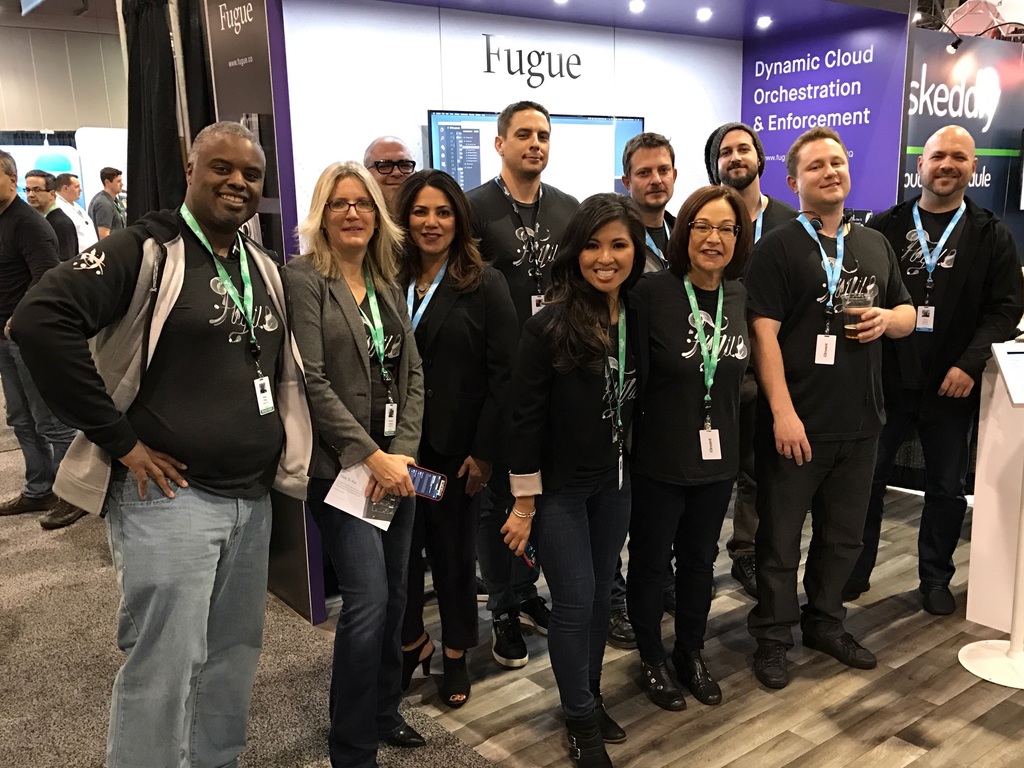