Network security is critical to operating in the cloud. There are many different ways you can secure your network, but the best approach is to layer multiple methods. The more layers implemented in your security, the harder it is for malicious actors to access your network.

In a three part blog series, we will focus on several “layers” of practicing defense in depth. This first blog discusses VPC endpoints - what they are, how they work, limitations of using endpoints, and how they can help improve network security.

For the security-minded, Amazon Web Services VPC endpoints present a safer way to allow network resources to connect to other AWS services. Prior to the introduction of endpoints, VPC resources had to go out to the internet to communicate with certain services. This poses a potential security and availability risk, and complicates infrastructure architecture.

Now, VPC endpoints allow traffic to flow between a VPC and other services without ever leaving the Amazon network. This introduces a number of benefits, not the least of which is improved network security.

What is a VPC endpoint?

An endpoint is a network component that connects EC2 instances in a VPC to certain AWS services without requiring public IP addresses. With a VPC endpoint, instances don't need a NAT device, VPN connection, internet gateway, or AWS Direct Connect to communicate with supported services — they can communicate solely within AWS.

There are two types of VPC endpoints:

Both types keep traffic within the AWS network, but support different services and work in different ways. The destination service dictates which endpoint type you should use — see the AWS documentation for details.

What are AWS VPC interface endpoints?

An interface endpoint is an elastic network interface that allows a private IP address in a subnet to connect VPC resources to a number of AWS services, such as CloudFormation, Elastic Load Balancers (ELBs), SNS, and more.

Interface endpoints also let VPC resources connect to supported AWS Marketplace partner services in addition to endpoint services, which are hosted by AWS customers or partners in their own VPCs.

Traffic from VPC resources to the endpoint network interface is controlled by security group rules. AWS PrivateLink then enables the endpoint to connect the traffic to other services without going over the internet.

AWS charges usage and data processing rates for PrivateLink, so there are additional costs involved with creating and using an interface endpoint.

When you choose one or more subnets in a VPC to use your interface endpoint, AWS creates an endpoint network interface in each selected subnet.

You can then optionally enable private DNS when connecting to the service, which allows requests to use the default DNS hostname instead of endpoint-specific hostnames. Private DNS is enabled by default for AWS and AWS Marketplace services.

Finally, the owner of the service, such as AWS itself or a third party from the Marketplace — known as the service provider — either manually or automatically accepts endpoint requests from you, the service consumer.

Accepted endpoint requests are then privately connected to the service. 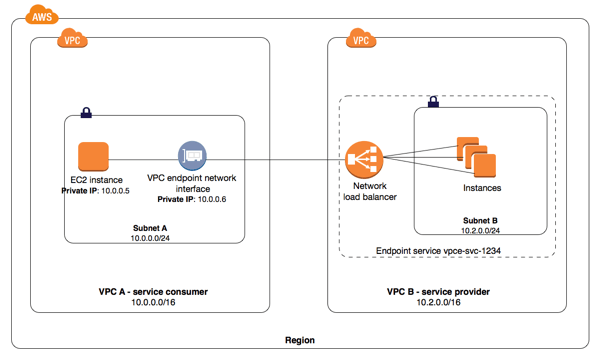 Above, instances in subnet A of VPC A use an interface endpoint to access the services in subnet B. Image from https://docs.aws.amazon.com/vpc/latest/userguide/endpoint-service.html

What are AWS VPS gateway endpoints?

In contrast, a gateway endpoint is a target for a route in a route table to connect VPC resources to S3 or DynamoDB. Traffic is then routed from instances in a subnet to one of these two services.

Gateway endpoints do not use PrivateLink. Therefore, apart from the standard costs of data transfer and resource use, AWS doesn't charge extra for using gateway endpoints, unlike interface endpoints.

Subnets associated with the route tables are automatically granted access to the endpoint, and traffic from instances in the subnet is routed through the endpoint to the service according to the endpoint policy. The default policy allows full access from any credentialed user or service within the VPC to S3 or DDB resources.

A VPC security group must have a rule allowing outbound traffic from the VPC to the specified service (S3 or DDB) in order for traffic to flow through a gateway endpoint. 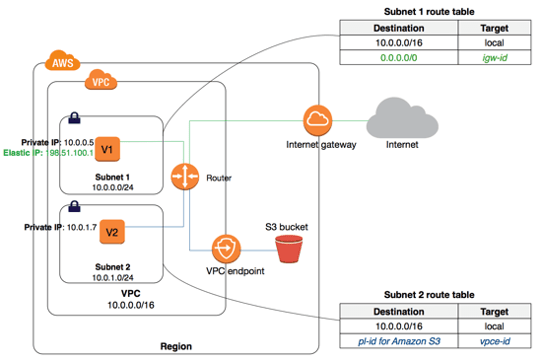 Above, instances in subnet 2 can access Amazon S3 through the VPC gateway endpoint. Image from https://docs.aws.amazon.com/vpc/latest/userguide/vpce-gateway.html

The biggest reason VPC endpoints are beneficial to network security is that there's no need for VPC resources to traverse the internet to reach a particular service. By preventing data from being unnecessarily exposed to the internet, it's easier to secure network traffic and ensure it remains compliant with standards such as PCI or HIPAA that concern sensitive data.

VPC endpoints also simplify infrastructure architecture. For example, you can use an interface endpoint to connect traffic from an instance to a service such as SQS, or you can:

You can use a gateway endpoint to connect traffic from a private subnet to a service such as S3, or you can:

The limitations of VPC endpoints

There are a few items worth noting when using VPC endpoints:

For more information on endpoint limitations, see the AWS documentation for interface endpoints and gateway endpoints.

VPC endpoints: Just one part of defense in depth

VPC endpoints are one element of a defense in depth approach to network security. Combined with tightly scoped security group and network ACL rules; IAM user/group/role, resource, and endpoint policies; and other methods of VPC security, you can effectively limit the exposure of critical data to the internet and more effectively secure your network.

To learn more about Fugue and how we can help with your cloud security, please visit fugue.co.