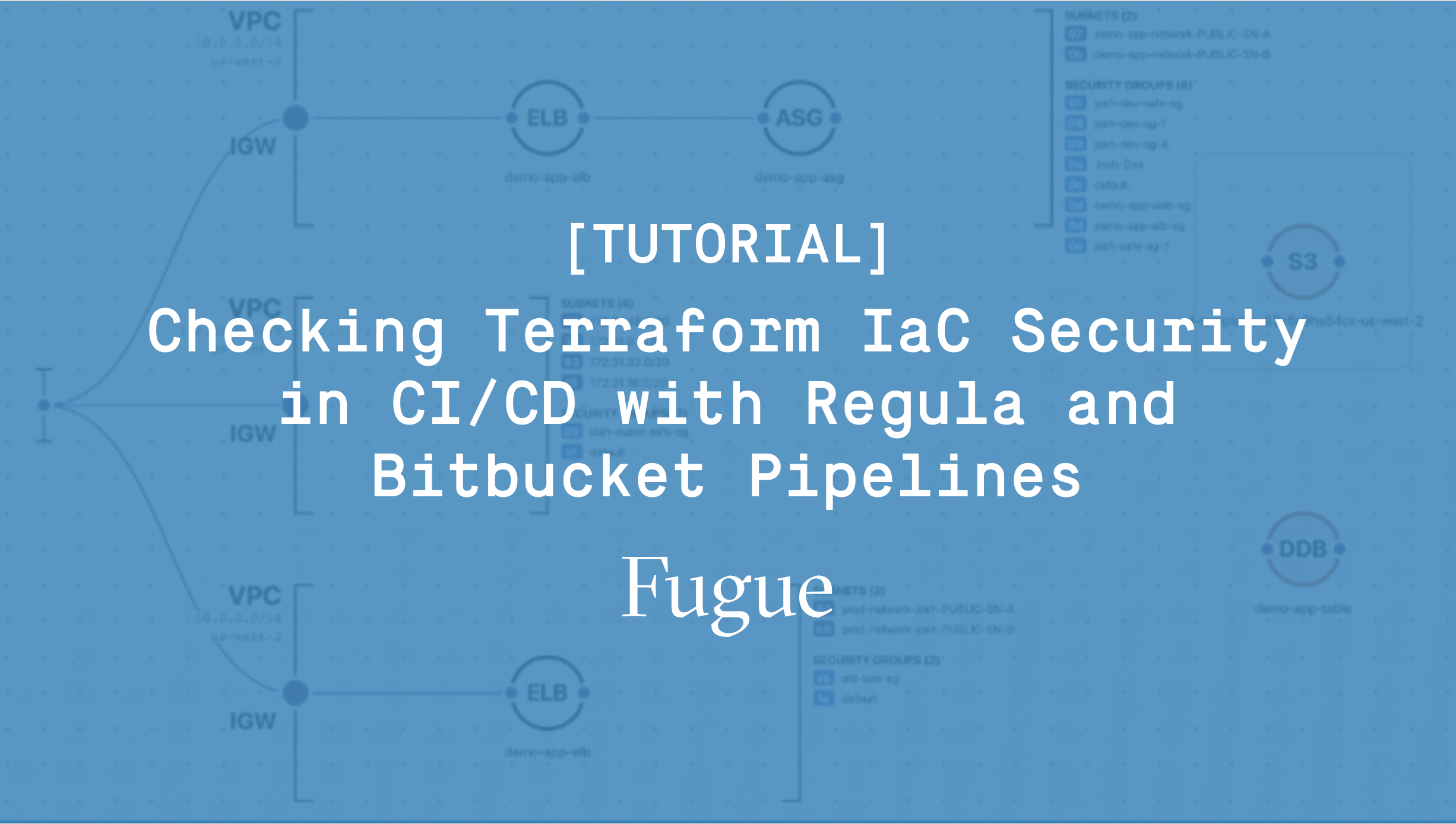 In this blog post, we’ll demonstrate how to integrate Regula with Bitbucket Pipelines (an integrated CI/CD service built into Bitbucket) for automated testing of Amazon Web Services (AWS) resources declared in Terraform. When we commit to our repository containing Terraform, we’ll trigger a build with Bitbucket Pipelines. We’ll show how Regula catches a security vulnerability and fails the CI build, and we’ll show how to remediate the violation so the build passes.

When we’re done, the CI/CD pipeline will execute the following flow:

Tip: While each CI/CD tool is unique, you can still follow the steps above to check your IaC in CI/CD with Regula.

What’s in the repo? 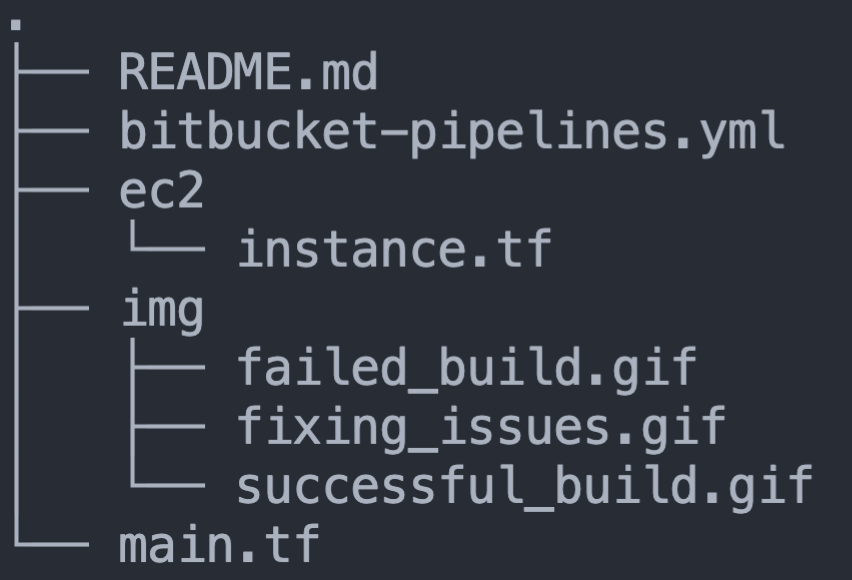 What you see above is a visual representation of the file structure for the above repo, which most notably contains:

Now we’ll set up Bitbucket Pipelines to run builds for our repository. From within your Bitbucket repository, click “Repository Settings” along the left side of the page, then scroll down to the bottom of the menu that appears on the left side of the page to the “Pipelines” section. Click “Settings,” then click the slider next to “Enable Pipelines” so that it appears green with a white checkmark.

Let’s take a look at the individual files in our repository, starting with ec2/instance.tf.

To demonstrate the simple power of Regula, I’ve intentionally included security vulnerabilities (and commented hints that indicate how we can fix them) in the EC2 instance (note: don’t deploy this Terraform to AWS without fixing these security violations). Let’s dig into these vulnerabilities:

Deploying this EC2 instance as-is into production would expose us to malicious actors, who could detect and exploit this vulnerability using automation tools far before we even know this vulnerability exists! Luckily, Regula includes hundreds of rules to scan our IaC for violations of Center for Internet Security (CIS) Benchmarks.

Let’s break down how the bitbucket-pipelines.yml file tells Bitbucket Pipelines what to do when a build is triggered. First, we let Bitbucket know that this is a pipeline and, in fact, the default pipeline (you can create a separate pipeline for pull requests, for different branches of the repo, and other reasons):

I've opted to have the following steps run sequentially, but I can also opt for them to run in parallel by adding the parallel command in the column to the left of the steps.

Next, I'll declare my first step, which uses the HashiCorp Terraform image to initialize Terraform, adjust my Terraform formatting to HCL canonical standards, and ensure the validity of my Terraform (for example, ensuring I have declared all of my variables and modules):

The second step in my pipeline harnesses the power of Regula by automatically detecting any IaC files (Terraform, Cloudformation, Azure Resource Manager, and Kubernetes manifests) in the root or any child directories, and scanning every IaC file detected in my repository against CIS Benchmark standards (Fugue provides out-of-the-box support for additional compliance families such as SOC 2, HIPAA, and NIST 800-53).

The final step re-initializes Terraform and engages the HashiCorp Terraform image again, because each step in the Bitbucket pipeline runs a separate Docker container, so declared dependencies do not carry over between steps. The final step then creates a Terraform plan and applies the plan:

Kick off a build

Trying (and failing) a build

I begin by entering the following commands in my terminal after completing edits on my repository containing IaC files:

Upon detecting the new commit to my repository (or being manually commanded to do so), Bitbucket Pipelines will trigger the pipeline described in the .yml file above. See below for what happens when I try to commit to the main branch of the repository with Terraform that violates CIS Benchmarks:

Now that I know I have misconfigurations in my Terraform files, I can go back into my repo and run Regula locally to address those issues. I set up this repository to allow me to un-comment my Terraform code corrections easily, but properly configuring your infrastructure is as easy as clicking the Fugue rule remediation documentation hyperlink that populates with every rule violation following a regula run. See below for how I fixed Fugue rules FG_R00253 and FG_R00271, then re-checked my infrastructure with a final regula run.

With my infrastructure properly configured, I'll commit to my Bitbucket repository again to maximize the automation provided by the Bitbucket Pipeline I have configured for my repository.

…resulting in a successful build:

And that's it! Now we have a Regula/Bitbucket Pipeline to securely automate the deployment of cloud infrastructure using Terraform.

Fortunately, you don’t have to wait for Bitbucket Pipelines (or other CI/CD tools) to find the errors for you. You can run Regula locally before you commit and push your changes, and in fact we recommend you do so! My personal favorite is the Regula pre-commit hook, which operationalizes defense-in-depth by forcing developers to remediate security and compliance violations before committing their code. By catching issues earlier in the development cycle, you “extend left” on security, speeding up development and saving time, money, and frustration later.

First, install Regula locally. It’s a single, self-contained binary, so there’s no need to install any prerequisites. Just follow the steps in the documentation according to your operating system.

Then, from the root of your repository, run the same command that Bitbucket Pipelines runs:

You’ll see the same output that you see in the Bitbucket Pipelines logs, but by running this locally, you will avoid expending build minutes and distribute the responsibilities of security teams to the developer level, thus reducing (or eliminating altogether!) security-driven bottlenecks prior to deployment.

Interested in other ways to automate the secure deployment of cloud infrastructure? Check out our blog post about integrating Regula and Travis CI.

You can also use Regula with Fugue to achieve end-to-end security and compliance across the entire software development lifecycle – from development to deployment to runtime. For more information about Fugue, visit www.fugue.co.